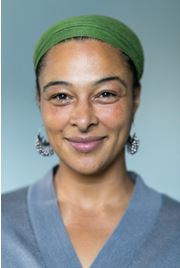 Gia Winsryg-Ulmer is an educator and writer with a Masters in Education from Bank Street College of Education. She worked for 10 years with the Teachers and Writers Collaborative in New York City’s public schools. She enjoys MVYLI’s collaborative approach and strongly believes in the power of collaborative teaching to enhance the education process for all students.

Gia received a B.A. from Brown University in African American Studies, English and American Literature. She spent a year studying at the University of Dar Es Salaam in Tanzania. It was the first of many sojourns into Africa to explore her roots. A highlight of her work as a writer-in residence was organizing a poetry exchange between students in Brooklyn, New York and students in Durban, South Africa, while attending the World Conference Against Racism NGO Forum.

As a classroom teacher at the Brooklyn Free School she organized and fundraised for a service-learning trip to Tanzania. Gia met her husband Rachid while traveling in Morocco. They now live in Katama with their three small children. Gia’s writing is in From Medusa to the Sky, a collection of creative writing lessons, Yes! Magazine and CrossBronx Online Literary Journal. She is writing Afro futuristic science fiction novel called Sunstone.